The Central Bank of Libya (CBL) Governor, Saddik Kabeer, said that he was very optimistic about Libya’s economy in 2013.
Speaking in Arabic on skynewsarabia.com yesterday, Governor Kabeer said that the CBL’s overseas frozen assets of around US$126 billion had all been released and that releasing them does not mean that Libya is going to repatriate them, but that it means that Libya was now free to administer and manage them freely as it pleased.
Governor Kabeer went on to forecast that Libya’s economy would grow by “about 20% if not more” in 2013. This is 4% higher than the IMF’s May forecast of 16% for 2013.
More importantly, Kabeer went on to assure that the security situation in Libya would improve in 2013 which he anticipated would lead to the “activation of current contracts” and the “return of foreign companies to resume their work”.
The governor gave no hints as to the progress of discussions with foreign contractors with regards to their demands for their outstanding debts with Libya, or with regards to some of their claims for compensation for losses incurred during Libya’s revolution.
Governor Kabeer made no comments either about Libya’s 2013 budget, set at LD 66 billion (about US$ 53) and which is currently being discussed by Libya’s parliament, the General National Congress (GNC).
Foreign contractors will be eagerly waiting to view the details of the budget to see what amounts are set by the Libyan authorities in its Development Section. A high amount in this section would indicate that the Libyan government is seriously ready to pump some money into this stalled sector.
libya herald
Posted by هدى السرارى at 5:51 م ليست هناك تعليقات: Links to this post

Posted by هدى السرارى at 5:11 م ليست هناك تعليقات: Links to this post

Posted by هدى السرارى at 4:10 م ليست هناك تعليقات: Links to this post

#Libya Has Done it Again!!

The world, indeed we Libyans, are in awe at the fantastic spontaneous celebrations that have taken place all over Libya marking the second anniversary of the February 17 Revolution. Libyans across the country celebrated in a civil, peaceful and organised manner, the ousting in 2011 of the long-time former dictator Muammar Gaddafi

Families in their hundreds came out to the martyr’s square in the Libyan capital, Tripoli and in the main squares in all the towns and cities, particularly also in the eastrn city of Benghazi, to celebrate this historic occasion.

The crowds started pouring in a steady stream from early morning on Sunday and continued until very late into the night. The jubilation of the crowds was a joy to witness.

People were hard at work in the days leading to the actual celebration sweeping the streets, decorating them with streams of flags and lights, while families in each neighbourhood collected money to buy a camel to be barbecued as a February 17 celebration meal.

On the day commemorating February 17, people woke up to a glorious sunny day; families enjoyed lunch together and then proceeded to the martyr’s square. As one passed through the different neighbourhoods the Libyan army could be seen in all the main crossroads organising traffic.

People waved at them shouting and wishing them happy February 17 anniversary. Soldiers shouted similar greetings in return, while others sprayed people with perfume or orange blossom water. Orange blossom water or perfume spraying is a Libyan ritual reserved only for weddings.

The Libyan revolution was continually put down, by some Arabs as being ruthless and not as organised as our Arab spring neighbours, Tunisia and Egypt. The criticism varied, some saying that the Libyan revolution only survived because Libyan oil was an incentive for the world to back us, NATO to help us.

Well, to that I will say that the brutality of the system was why the Libyan people had to resort to violence to defend themselves.

Though some may think I am bragging, which in all honesty I am, Libya has outdone its excellent neighbours because while people in Libya celebrated their revolutions second anniversary, in Egypt and Tunisia the people did not celebrate. They demonstrated in a messy fashion, many people died and government institutions were stormed by angry mobs.

The weeks before the February 17 anniversary, the Gaddafi agents who had fled the country, and some members of his exiled family, made some empty threats about coming back to avenge themselves of the Libyan people. They imagined that the Libyan people will take their cue from Egypt’s streets and go out in demonstrations; that they could manipulate us into chaos.

In a generous gesture the Libyan people denied them that opportunity. Even though there were many causes to demonstrate against they realised that the danger was too grave and instead opted to put the country’s interests before their own.

The secret of the Libyan success story, that in my opinion never ceases to impress the world, is the people’s ownership of the revolution. A friend described the celebratory scenes we saw in the streets in this way: “it’s as if they were all in a huge wedding where no one was a guest; everyone feels they are a host and wants to serve everyone else.”

I hope that Libyans will continue to inspire the world and may God bless Libya and keep it free and safe forever.
tripoli post
Posted by هدى السرارى at 4:06 م ليست هناك تعليقات: Links to this post

Posted by هدى السرارى at 4:03 م ليست هناك تعليقات: Links to this post 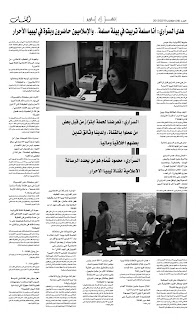 Posted by هدى السرارى at 3:44 م ليست هناك تعليقات: Links to this post

Posted by هدى السرارى at 3:32 م ليست هناك تعليقات: Links to this post

#Saudi_Arabia to name and shame traffickers

The move would be part of a campaign by the government to tackle the phenomenon and its perceived security threats and to arrest traffickers, sources told local daily Al Riyadh.
Reports have warned about an increase in the attempts to smuggle women from different nationalities illegally into the kingdom or from one region to another.
Many of the women whose health conditions were not documented or were unlawfully employed as domestic helpers or in other sectors, posed serious health threats to those who come in contact with them, sources told the newspaper.
Article continues below
“Some of the women who are allowed to work in homes scout the houses for other members of a gang and help them to break into them,” the sources said. “When the helper absconds, the family have no information about where she came from and where she can go.”
Campaigns should be launched to promote awareness about all the personal, social and national threats associated with the movement or hiring of illegal workers, the sources said.
According to security reports in Saudi Arabia, most of the illegal women caught in raids were from Yemen and African countries.
Several of the women were also detained for selling odd items or for soliciting, they said.
The Commission for the Promotion of Virtue and the Prevention of Vice last year said that its members arrested a Saudi national and several Africans for possessing drugs, stolen identity cards and mobile phones and forged documents.
A trafficker recently told a Saudi daily about the lucrative business of trafficking, saying that whenever he needed money, he agreed to smuggle illegal foreigners and drive them from one area to the other.
He said that he received 500 Saudi riyals (Dh489.49) per head and that his strategy included avoiding patrolled roads or using a second car ahead of his vehicle to sweep the area for possible police check points.
Saudi Arabia is home to around nine million foreigners.
gulfnews./
Posted by هدى السرارى at 3:19 م ليست هناك تعليقات: Links to this post

Thousands of Libyans celebrate the second anniversary of the Libyan uprising at Martyrs Square in Tripoli. — AFP


TRIPOLI – Just when it might have been thought that after several days of massive celebrations Tripolitans would be exhausted and there could not be any more firework left to set off, Tripoli outdid itself Sunday evening in celebrating the second anniversary of the revolution.

There were even more people out on the streets across the city than the previous night. The noise of fireworks and car horns was deafening, constant and lasted well into the night.

Thousands of lanterns streamed across the capital’s sky. The source of many was Martyrs Square where tens of thousands congregated to share tea, blow air horns and set off fireworks.

Cars decked out in flags criss-crossed the city all day as Tripolitans tracked down friends and family in different parts of the city.

‘I’ve never seen anything like it,’ said one visitor from Tunisia as she stood in Martyrs’ Square watching the flag-waving and fireworks.

The capital’s residents shared food and drink in the square and launched a constant stream of Chinese lanterns. Not all made it out of the square though, with a number returning to earth to hit unsuspecting revellers.

Sunday’s celebrations conclude nearly a week of successful celebrations that many were worried would be tainted by violence.

Celebrations exploded Saturday in the Fashloum district of Tripoli. Fashloum, which was one of the first areas to rise up without fear against Gaddafi, cut a huge cake in the colors of the Libyan flag at the stroke of midnight.

Fashloum street, which is at least a couple of kilometers long, was totally closed from the Jamhuriya Street roundabout to the Jraba Street roundabout with men, women and children, letting-off fireworks, blowing car horns to blaring music and flashing lights – creating a euphoric atmosphere.

Dancing and singing in the street, to huge street-side speakers, was a familiar sight. Young boys distributed washeg (Arabic incense), sweets, chocolates and juice to walkers by and passing cars.

Despite all the talk about security in the lead-up to the anniversary of the revolution, one woman enjoying the Fashloum celebrations mentioned how safe she felt in the street saying that it was for her “safer than any other day”.

It is also worth noting that the current Libyan authorities refused to set a budget for the celebrations, in contrast to the multi-million dinar budget that the Gaddafi regime used to set and pilfer for its celebrations.

In contrast, all of the celebratory paraphernalia was paid for by the public. Many streets organized money collections to create funds to buy flags, banners, street lights, fireworks and to hire chairs and tents etc.

It was truly a celebration by the people for the people. – Libya Herald

Posted by هدى السرارى at 2:53 م ليست هناك تعليقات: Links to this post