The japan news
Bloomberg NEW YORK (Bloomberg)—West Texas Intermediate crude was little changed near the lowest level in four months Monday amid rising supplies and as the dollar weakened against the euro.
Prices ended up 1 cent. Libya, North Africa’s largest oil producer, prepared to resume exports at two terminals, according to the state oil company. U.S. crude stockpiles are at the most in four months, and shipments from Iraq jumped in October, government reports showed last week. The dollar slid from a six-week high, strengthening oil as an alternate investment, amid speculation that the U.S. Federal Reserve Board will maintain stimulus.
“The news that Libya is going to raise exports should be bearish,” said Michael Lynch, president of Strategic Energy & Economic Research in Winchester, Mass. “U.S. crude inventories are over abundant. That’s keeping WTI lower than Brent. People are pricing in Fed stimulus and a weaker dollar.”
WTI for December delivery reached $94.62 a barrel on the New York Mercantile Exchange. It settled at $94.61 on Friday, the least since June 21. The volume of all futures traded was 23 percent below the 100-day average at 3:53 p.m. WTI dropped 5.8 percent in October, the biggest monthly decline in a year.
Brent for December settlement gained 32 cents, or 0.3 percent, to $106.23 a barrel on the London-based ICE Futures Europe exchange. Volume was 4.7 percent above the 100-day average. The European benchmark’s premium over WTI widened to $11.61 from $11.30 on Friday.

A tanker was scheduled to take on oil at Libya’s Mellitah terminal Tuesday and loadings will probably resume next week at Hariga once vessels arrive at the eastern port, said Mohamed Elharari, a spokesman for state-run National Oil Corp.
Posted by هدى السرارى at 4:46 م ليست هناك تعليقات:

Russian envoy
Russia has asked the UN Security Council to look into the dangers posed by a badly-guarded stockpile of yellowcake uranium in the Libyan Desert.

have spoken with UN General Secretary Ban Ki-moon about the issue, and asked him to take it up with the United Nations mission in Libya,? Russia?s UN envoy, Vitaly Churkin, told ITAR-TASS news agency from New York. ?I also said we would mention the problem at Security Council consultations, and we have done so.?
There are reports allege that Al-Qaeda is interested in the Libyan yellowcakes which could be used for a potential nuclear weapon component.Churkin also said that the head of United Nations Support Mission in Libya, Tarek Mitri, spoke with Prime Minister Ali Zeidan, who promised to focus on the issue. The Russian diplomat also said that a special inter-ministerial committee was set up in Tripoli to deal with the matter. Churkin said Russia made two specific proposals. To send the matter to the expert panel committee of the UN Security Council (UNSC) that monitors the implementation of sanctions against Libya so not to export arms; and inform Libya authorities of the concern of the Security Council of the situation.An estimated 6,400 barrels of yellowcake uranium were discovered near the southern city of Sabha towards the end of the uprising of 2011. The UN?s International Atomic Energy Agency (IAEA) has performed an inventory of the stock ? which is kept in an ordinary warehouse, next to an estimated 4,000 surface-to-air missiles previously procured from Russia ? and technically maintains control over it, RT reported. Yet a report from a visiting journalist in the UK?s Times newspaper last month alleged that the stockpile was in the control of a local weapons dealer, and his men did not even guard the warehouse for fear of suffering radiation poisoning.
Posted by هدى السرارى at 4:01 م ليست هناك تعليقات:

di-ve
106 Libyan students arrived in Malta this week to start their vocational studies at the new Libyan Higher Vocational Institute. These students are the first Libyans who will be coming to Malta to gain vocational skills in mechanical engineering, electronics, electrical engineering and welding. During their six month full-time programme, the students will also attend English and IT classes.
The students hail from different cities across Libya and their experience in Malta will help them to gain more employability skills.
Over 1,000 students are expected to be trained at the Libyan Higher Vocational Institute through an agreement that was signed between the Libyan Ministry of Labour and Capacity Building and the Maltese Ministry of Education and Employment in 2012.  Through this agreement, Libyan students will follow courses accredited by MCAST and all training will be held at the Libyan Higher Vocational Institute at Ta’ Giorni.
The Libyan Government is committed in setting up a new and modern ‘centre of excellence’ in further and higher education and training at the Libyan Higher Vocational Institute. It is planning to invest €21 million for the building of a new campus which will have a new state-of-the art educational and training facility and student residential facilities.  The Institute has already been licenced by the National Commission for Further and Higher Education and the Monitoring Board for the Teaching of English as a Foreign Language
Posted by هدى السرارى at 3:58 م ليست هناك تعليقات: 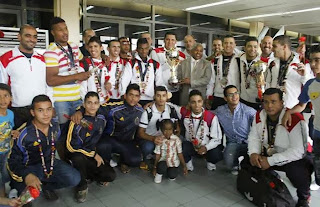 Libyanherald
Tripoli, 6 November 2013:
Libyan weightlifters have won the African Championship Cup after being awarded 37 medals in the under-20s Youth and Juniors category.
They came away with five gold, 24 silver and eight bronze medals from the competition, which was held in the Moroccan city of Casablanca. Other participating countries included Algeria, Mauritius, South Africa, Kenya and Morocco.
The weightlifters were welcomed back to Libya by the undersecretary of the Ministry of Youth and Sports, Jumaa Shoushan. When they landed at Tripoli International Airport last night Shoushan, along with a traditional Libyan band, was there to greet and congratulate them, media director of the Ministry of Youth and Sports, Mazin Drebika, told the Libya Herald.


THE NEWS
Brent futures on Tuesday traded near a four-month low touched overnight, but worries over a prolonged outage from oil exporter Libya helped the benchmark hold above $106 a barrel.

Heavy shooting erupted early on Tuesday in the Libyan capital, Tripoli, the latest unrest in the OPEC producer that highlights the government’s inability to control militia groups.

A prolonged cut in exports just as refiners are expected to ramp up runs to meet winter demand for fuel may keep oil, particularly Brent, supported.

US oil was up 6 cents at $94.68, having also slumped to a four-month low in the earlier session.”Oil is looking for a bottom, and the downside we are seeing now is quite temporary,” said Tetsu Emori, a commodities fund manager at Astmax Investments.

Libyaherald
By Maha Ellawati and Tom Westcott.
Benghazi/Tripoli, 6 November 2013.
A Canadian teacher who worked at the International School of Benghazi died yesterday from natural causes.
James Scratch, a 56 year-old humanities teacher, was taken to Benghazi Medical Centre (BMC) yesterday with a suspected heart condition and was pronounced dead by the duty doctor.
“He died of natural causes,” Manager of the International School, Adel Al-Mansouri told the Libya Herald. “We initially thought it was heart attack but the coroner has just finished the autopsy, and told us that it was a brain haemorrhage.” Scratch had complained of a severe headache for several days, but had apparently not sought medical attention.
“This could happen to anyone, at any time and in any place,” Mansouri said. He added that Scratch, who had been living in Libya for 18 months, loved Benghazi. “He felt safe and secure here and, when foreign nationals were advised to leave the city earlier in the year, he was one of our staff who wanted to stay,” he said.
Scratch would be missed by colleagues and students, Mansouri said, adding: “He had a good character and was a very nice man.”
Scratch’s family have been informed and the school is now in the process of arranging to return his body to Canada.
People on social media networks were quick to assume the worst when reports first surfaced that a Canadian national had died in Benghazi. Rumours were fuelled by the discovery, also yesterday, of a bomb outside the BMC, which was successfully defused. YAHOO NEWS
Tripoli (AFP) - Slain Libyan leader Moamer Kadhafi's son Seif al-Islam, wanted by the International Criminal Court, has appeared on television from his cell in a prison southwest of the capital.
He gave brief answers to three questions from a journalist for Alassema television late Tuesday, confirming that he was allowed to receive visitors and was in good health.
Asked if he wanted to be tried in Tripoli or Zintan, 180 kilometres (110 miles) from the capital, he said: "Zintan is in Libya. There's no difference between Zintan and Tripoli."
The broadcaster said he had at first declined to be interviewed through his lawyer, but had then agreed to answer just three specific questions.
With a finger placed over his lips to hide a missing tooth, Seif appeared nervous and uncomfortable in front of the camera. He wore a blue prison uniform and was seated on his cell bed.
Ajmi al-Atiri, head of the ex-rebel brigade which captured Kadhafi's son in November 2011 and has been holding him since, said for "security reasons" he would not be transferred to Tripoli.
On October 24, a Tripoli court indicted Seif and around 30 Kadhafi aides for a raft of alleged offences during the 2011 revolt which toppled the regime.
But the Zintan rebels refused to have him transferred to the capital, despite a request from Libya's prosecutor general and although the authorities say his jail is under state control.
Instead, Seif appeared in court in Zintan the same day on charges of undermining state security.
Seif al-Islam, Kadhafi's former heir apparent, is still wanted for trial by the International Criminal Court in The Hague on charges of war crimes and crimes against humanity during the uprising.

The ICC in May rejected Tripoli's request to try the slain dictator's son in Libya because of doubts over a fair trial. Tripoli has appealed the decision
Posted by هدى السرارى at 2:50 م ليست هناك تعليقات: