(Reuters) - Iranian Supreme Leader Ayatollah Ali Khamenei warned on Thursday that the Islamic Republic would destroy the Israeli cities of Tel Aviv and Haifa if its nuclear infrastructure came under attack from the Jewish state.
Israel puts little stock in big power negotiations aimed at curbing Iran's uranium enrichment - which Western nations suspect is a conduit to nuclear weapons capability - and has repeatedly hinted at pre-emptive war against its arch-enemy.
During a visit to Israel on Thursday, U.S. President Barack Obama acknowledged its security concerns, saying, "America will do what we must to prevent a nuclear Iran." But he also said big powers believed there was still time for a diplomatic solution.
Russia said Iran and six global powers made headway in expert-level talks this week to ease the 10-year-long standoff over Tehran's nuclear ambitions, but the risk of backsliding towards confrontation remained.


(Reuters) - An explosion at a mosque in the Syrian capital on Thursday killed at least 15 people, including a senior pro-government Muslim cleric, state television and activists said.
Syria TV said a "terrorist suicide blast" hit the Iman Mosque in central Damascus, and Mohammed al-Buti, the imam of the ancient Ummayyad Mosque, was among the dead.
Buti, a government-appointed cleric reviled by the Syrian opposition movement, delivered the official weekly Friday mosque sermons on state television.
In one of his televised speeches, Buti described those fighting to topple President Bashar al-Assad as 'scum'. He also used his position to call on Syrians to join the armed forces and help Assad defeat his rivals in the country's two-year-long rebellion.
Video released by Syria's al-Ikhbariya channel showed dozens of limp bodies lying on the bloodied carpet of the mosque, as emergency workers rushed in to give survivors first aid. Mangled limbs lay among the wreckage.
The British-based Syrian Observatory for Human Rights, which has a network of activists across Syria, said around 15 people died in the blast in central Damascus.
The Observatory said it was unclear if the explosion was caused by a car bomb or a mortar shell. Dozens more were wounded in the attack it said.
The Iman mosque is also next to the offices of Assad's ruling Baath party as well as other government compounds.
Locals were panicked after the blast late on Thursday and described seeing ambulances rushing to the area while traffic came to a standstill. Residents near the mosque said the strong, acrid smell of gun powder still hung in the air.
"RECEIVING GOD'S WRATH"
Buti, 84, led the funeral prayers for Bashar al-Assad's father, the late President Hafez al-Assad.
The imam's critics saw him as a religious mouthpiece in support of Assad. When the revolt started in March 2011, he quickly threw his support behind the Assad family, which has ruled Syria for more than four decades.
Buti was a Sunni Muslim, the sect which makes up the majority of Syria's population.
Sunnis have led the revolt against Assad, a movement that began as peaceful protests but devolved into bloody civil war that has sparked sectarian bloodshed between Sunnis and Assad's minority Alawite population.
It was unclear who was behind the Damascus blast, although Syria TV immediately accused "terrorists," a term frequently used to described rebels. If opposition fighters were responsible, it would signal the ease with which they are able to strike in the heart of the capital compared to a year ago.
Some opposition activists argued the rebels could not have been behind the attack, and called it a government plot. They said it was unlikely that rebels, many of whom are deeply religious, would target a mosque.
"The regime eliminated Buti," said Leena al-Shami, a Damascus activist speaking on Skype. "One of the last things he said is that Assad is the prince of Muslims and Syrians fight with him, as in jihad (holy war).
Posted by هدى السرارى at 9:35 م ليست هناك تعليقات: Links to this post Posted by هدى السرارى at 12:56 م ليست هناك تعليقات: Links to this post Posted by هدى السرارى at 12:52 م ليست هناك تعليقات: Links to this post Posted by هدى السرارى at 12:44 م ليست هناك تعليقات: Links to this post

Posted by هدى السرارى at 12:40 م ليست هناك تعليقات: Links to this post 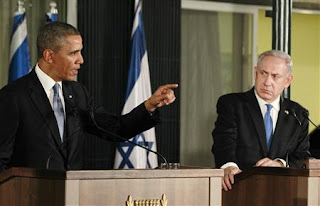 (Reuters) - After an effusive welcome in Israel, President Barack Obama traveled to the occupied West Bank on Thursday for talks with Palestinian leaders who accuse him of sidelining their dream of statehood.
Obama flew by helicopter to the Palestinian government headquarters in Ramallah, where disillusioned Palestinians held out little hope that their moment in the U.S. presidential spotlight would help revive a long-dormant peace process.

Some 150 Palestinian demonstrators gathered in Ramallah to protest against Obama's visit. They were held back by mass ranks of police who prevented them from nearing President Mahmoud Abbas's compound, where the aircraft landed.
A smiling Obama, accompanied by Abbas, was met by mostly stern-faced Palestinian officials along a red carpet - a stark contrast to the broad grins and backslapping during an elaborate welcoming ceremony on Wednesday at Tel Aviv airport.
Obama has made clear he is not bringing any new peace initiatives but instead has come to Israel and the Palestinian Territories on a "listening" tour.
As a reminder of the ever-present risks in the region, Palestinian militants in the Gaza Strip fired two rockets into Sderot, a southern Israeli town that Obama visited as a presidential candidate in 2008. Police said no one was hurt.
There were no claim of responsibility, and Obama is not going to visit Gaza, which is controlled by the Islamist group Hamas, a rival to the Western-backed Abbas, who condemned the attack.
Obama held talks with Israeli Prime Minister Benjamin Netanyahu on Wednesday and toured the Israel Museum with him on Thursday, viewing the ancient Dead Sea Scrolls - underscoring the Jewish link to the Holy Land - and a high-tech exhibit.
The main focus of his initial discussions with Netanyahu appeared to be pressing regional concerns, primarily Iran's nuclear ambitions and the civil war in neighboring Syria, and winning the hearts of a skeptical Israeli public.
After repeated run-ins with Netanyahu during Obama's first term in office, the mood between the two men appeared to be much warmer, angering Palestinians, who blame the 2010 collapse of U.S.-backed peace negotiations on the Israeli leader's expansion of Jewish settlements on land where they want their state.
Obama is to address the decades-old conflict in talks with Abbas, a moderate whom Washington wants to shore up, and also in a keynote speech hours later to students in Jerusalem.
REDUCED GOALS
After the lofty ambitions of Obama's first term, when he appointed a special envoy to the Middle East on his very first day in charge and said peacemaking was a priority, it was clear that the president has now set the bar significantly lower.
"I will consider this a success if, when I go back on Friday, I am able to say to myself I have a better understanding of what the constraints are," he told a joint news conference on Wednesday, standing alongside Netanyahu.
The three-day visit is Obama's first to Israel and the Israeli-occupied West Bank since entering the White House in 2009, and the inaugural foreign trip of a second and final four-year term that began in January.
Sporadic protests flared in the West Bank and Gaza Strip this week, with Palestinians accusing Obama of not doing enough to halt Israeli settlement-building on land seized in the 1967 Middle East war.
In 2009, Obama bluntly told Israel it had to halt settlement construction, but he later backed away from the demand and made no mention of the issue on Wednesday.
Posters depicting Obama were defaced in the West Bank cities of Ramallah and Bethlehem earlier this week and anti-U.S. sentiment bubbled up on social media.
"Do Not Enter," said one poster put up on Facebook, showing Obama's face with a red line crossed through it. "The people of Palestine do not welcome you here."
In Israel, Obama has been drawing new praise for his firm commitment to the security of the Jewish state and his pledge not to let Iran develop nuclear weapons.
Netanyahu, while citing what he described as Israel's right to defend itself, said that he was "absolutely convinced" that Obama was determined to prevent a nuclear-armed Iran. Tehran says it is enriching uranium for peaceful purposes.
The Hebrew-language press gave largely positive reviews for Obama, who is distrusted in Israel following perceived missteps in his first term that were viewed as hostile.
"A bit of informality, a joke or a gentle tease, a few words in Hebrew, and we are immediately filled with great love for the man who looks for a moment as if he likes us," a columnist wrote in top-selling daily Yedioth Ahronoth.
But the paper added: "Obama is here for one reason, to build up a stock of positive attitude, of trust, for the developments that lie ahead. For if he intends to push Netanyahu into a peace initiative, this will not happen without trust."
Netanyahu said on Wednesday that he hoped Obama's visit would help "turn the page" in relations with the Palestinians.
"Israel remains fully committed to peace and to the solution of two states for two peoples. We stretch out our hand in friendship to the Palestinian people," he added.
(This story has been refiled to add dropped words in 3rd paragraph)
(Additional reporting by Noah Browning in Ramallah, Nidal al-Mughrabi in Gaza and Matt Spetalnick, Allyn Fisher-Ilan and Crispian Balmer in Jerusalem; Editing by Jeffrey Heller)
Posted by هدى السرارى at 12:24 م ليست هناك تعليقات: Links to this post

* Cyprus faces stark choice between Europe and Russia
* Gas exploration already fuelling wider regional tensions
* At worst, outcome for Europe and island bleak
By Peter Apps and Henning Gloystein
LONDON, March 21 (Reuters) - As it tries to play Russia off against Europe to salvage its economy, Cyprus has embarked on a high-stakes poker game that could see almost everyone lose.