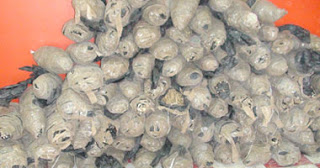 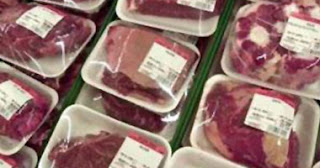 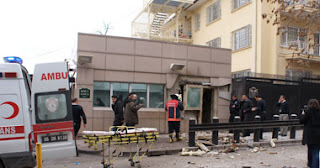 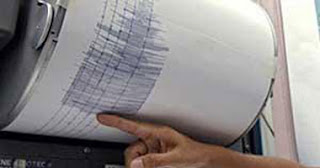 Turkey's extreme-left Revolutionary People's Liberation Party-Front (DHKP-C) has said it carried a suicide attack on the US embassy in Ankara on Friday.
It said the "act of self-sacrifice" had targeted the US, which the group called "murderer of the people of the world".
The bomber and a guard were killed in the attack at a side entrance of the heavily guarded compound.
The US has warned its citizens not to visit diplomatic missions in Turkey until further notice.
In an online statement the DHKP-C said: "Our warrior Alisan Sanli carried out an act of self-sacrifice on 1 February 2013, by entering the Ankara embassy of the United States, murderer of the people of the world."
Turkey and the US have denounced the incident as terrorism.
A number of illegal groups ranging from Kurdish separatists to leftist and Islamist militants have launched attacks in Turkey in recent years.
The US state department said a Turkish woman visiting the embassy had been seriously hurt and several staff members had suffered minor injuries.
The DHKP-C is designated a terrorist organisation in the US and Europe.
It has been blamed for a number of attacks since the 1970s, including some on US diplomatic missions.
Turkish police carried out a series of raids on suspected members in January.
The embassy building is heavily protected but the US has had long-standing plans to move its compound elsewhere for security reasons.
It was recently reported to be in the final stages of a deal to choose an alternative location.
http://goo.gl/BZnMP
Posted by هدى السرارى at 5:33 م ليست هناك تعليقات:

Associated Press= BEIRUT (AP) — Syrian rebels captured a strategic neighborhood near Aleppo's international airport on Saturday, putting opposition fighters in control of a key road that the regime has used to ferry supplies and reinforcements to soldiers fighting in the embattled northern city, activists said.
Troops loyal to President Bashar Assad and rebels have been locked in a deadly stalemate in Aleppo, Syria's largest urban center and main commercial hub, since an opposition assault last summer. Seven months later, the rebels hold large parts of the city and its outskirts, including several army bases, but they have been unable to overcome the regime's far superior firepower.
The capturing of the Sheik Said neighborhood, southeast of Aleppo, is a significant blow to regime forces because the area includes a major road, linking the northern city with the airport. The army has used the road to supply troops.
The Britain-based Syrian Observatory for Human Rights said rebels captured the area Saturday after several days of fierce battles with Assad's troops. Rebels have previously established enclaves outside Syria's major cities to threaten the regime, including near the capital, Damascus, but they were later attacked by Assad's fighter jets and artillery.
The opposition's Western backers, including the United States, have been reluctant to supply rebels with more sophisticated weapons because of the increased influence of an al-Qaida-affiliated group among the anti-Assad fighters on the front lines. The Islamists growing prominence in the Syrian opposition has fueled fears that Muslim radicals might try to hijack the revolt that started as peaceful protests against Assad, whose family has ruled Syria for more than 40 years.
In Germany, Vice President Joe Biden said, "The opposition (to Assad) continues to grow stronger."
Speaking at an annual security conference in Munich, Biden stated the conviction of the U.S. and many others. "President Assad — a tyrant hell-bent on clinging to power — is no longer fit to lead the Syrian people and he must go," Biden said.
Assad has repeated brushed aside international calls to step down, characterizing its opponents as Islamic extremists who are out to destroy the country. In a speech last month, Assad outlined a peace initiative that would keep him in power.
The opposition coalition has rejected any talks with Damascus until Assad steps down. However, Moaz al-Khatib, the president of the coalition that is dominated by the Muslim Brotherhood movement, said Wednesday that he is willing to negotiate with members of Assad's regime to bring a peaceful end to the country's civil war.
Later on Saturday, Biden was scheduled to hold a separate meeting in Munich with al-Khatib as well as the international envoy to Syria's conflict, Lakhdar Brahimi, and Russia's foreign minister, Sergey Lavrov.
Russia is Assad's longtime ally, and it has disagreed sharply with Washington and its Western allies on ways to end the bloodshed in Syria. Moscow has maintained that Assad is part of the solution to the crisis, though Russian officials have recently criticized their ally in Damascus and even mentioned the possibility of rebels winning the war.
However, Lavrov told the gathering of top security officials that Biden's statement that Assad must go was counterproductive.
"The persistence of those who say that priority No. 1 is the removal of President Assad — I think it's the single biggest reason for the continued tragedy in Syria," Lavrov said.
Syria's civil war is estimated to have claimed more than 60,000 lives since the uprising against Assad erupted in March 2011.
Despite disagreements on ways to end the fighting and Assad's role in peace efforts, Lavrov said Russia shared the West's concern over the fate of Syria's arsenal of chemical weapons.
As the regime grows more desperate to retain power, many fear it could use the weapons against its own people — a claim Damascus has repeatedly denied. There have also been concerns that conventional and unconventional weapons that Syria is said to have could end up in the hands of Islamic radicals.
"The red line is a common line for all of us: We are categorically against any use of weapons of mass destruction, be it chemical, be it biological, be it nuclear," Lavrov said. He added that the Syrian government has repeatedly assured Moscow that it is watching over those weapons and keeping the rebels away from the sensitive sites.
"Our partners agree with us that the biggest threat is the probability or possibility that the rebels get hold of those chemical weapons," Lavrov said.
Posted by هدى السرارى at 5:18 م ليست هناك تعليقات: 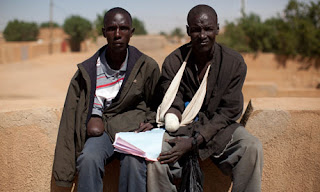 Algalas Yatara and Issa Alzouma in Gao, northern Mali. Both had their hands amputated after being accused of stealing a motorbike. Photograph: Soren Munk for the Observer

(Reuters) - Militants attacked an isolated army checkpoint in Pakistan's restive northwest on Saturday, with at least 35 people killed in the initial assault, subsequent crossfire and a rocket attack on a house, officials said.
The Pakistan Taliban claimed responsibility, saying the attack was in response to a U.S. drone strike in neighboring North Waziristan last month in which two commanders were killed.
The Pakistani military and pro-government militias have since 2009 regained territory from the Pakistan Taliban, who once controlled land a few hours' drive from the capital of Islamabad.
The militants attacked the post at Lakki Marwat early on Saturday.
A security official said 12 militants and 13 soldiers were killed in the clash. Two bodies had suicide bomb belts on them.
"Cross-firing between militants and security officials continued for four hours," one source said.
The militants also targeted a house next to the camp with rockets, killing 10 members of one family, including three children, the official said.
"Pakistan has been co-operating with the U.S. in its drone strikes that killed our two senior commanders, Faisal Khan and Toofani, and the attack on military camp was the revenge of their killing," the Taliban spokesman said.
He said four suicide bombers attacked the camp and blew themselves up. He said more than a dozen soldiers were killed.
(Additional reporting by Jibran Ahmad in Peshawar, Javed Hussain in Parachinar and Mubasher Bukhari in Islamabad; Writing by Nick Macfie; Editing by Sanjeev Miglani)
Posted by هدى السرارى at 3:54 م ليست هناك تعليقات: 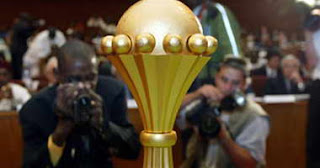 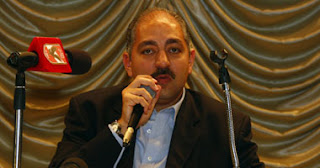