By Patrick Markey and Ghaith Shennib
TRIPOLI (Reuters) - The brother of a former rebel who has blockaded Libyan oil ports was held in Dubai after Tripoli issued an Interpol notice for his arrest on charges of trying to smuggle oil, Libyan government officials said.
The arrest of the brother of Ibrahim al-Jathran, whose blockade has cost the state billions of dollars, came as the government wages a campaign of attrition to weaken his movement for more autonomy and control of oil wealth in eastern Libya.
Members of the protest movement and Jathran's relatives confirmed his brother Khalid's arrest, but rejected the charges, accusing the government in Tripoli of fabricating the investigation to pressure Jathran by acting against his family.
Nearly three years after the fall of Muammar Gaddafi, the oil port blockade is one of most serious challenges in Libya's struggle to rein in former rebels who once fought Gaddafi but now refuse to accept the state's authority.
A former anti-Gaddafi rebel who become a commander of a state force set up to guard oil installations, Jathran and his troops defected in August and seized three oil ports, set up a self-styled government and cut off around 600,000 barrels a day of crude export capacity.
A senior Libyan government source and an official in the prosecutor's office said Khalid Jathran was arrested in the United Arab Emirates after Libyan authorities filed a "red notice" with Interpol, the international police agency.
"He is wanted for trying to sell Libyan oil illegally. The process of extradition is underway," the senior government source said, asking not to be identified.
Jathran has threatened to sell Libya's crude independently, but analysts say few would take the risk of loading oil seen as smuggling by Tripoli.
Siddiq al-Sour, a chief investigator in the state prosecutor's office, said Khalid Jathran was arrested in the United Arab Emirates when he had tried to renew his passport at the Libyan embassy.
"The information we got from Interpol is that he was arrested and detained," he said. "A delegation will be sent to the United Arab Emirates within days, and we expect the cooperation from the authorities there."
OIL PROTESTS
He said he was wanted on charges related to the oil protests and attempts to smuggle Libyan crude.
A security source in Dubai said Khaled Saeed Salem Awad, which relatives said was the brother's full family name, was arrested at the request of Libyan authorities made through Interpol. He was released on bail pending the receipt of the necessary papers from Libya required for him to stand trial.
It was not clear how long any extradition proceedings would take, if they were requested.
The accusations in the Interpol red notice are that he is a member of a criminal gang and that he has committed theft.
But his family dismissed those accusations, saying Khalid is a businessman who had been studying in the United Arab Emirates. Relatives did not immediately respond to a request to speak to his lawyer, but they said he was free.
"He has been arrested for one day, investigated and released, he is not under any house arrest," Salam Jathran, another of his brothers, told Reuters.
"What damage can he do to public money? He's not an official to be corrupted. Libyan authorities have made up all of these charges to put pressure on us as he is the only brother located outside Libya."
Asked to confirm the arrest, Interpol's press office said in an email that it does not usually comment on specific cases. It referred requests for information to the Libyan authorities.
Interpol red notices are the way the agency informs its 190 member countries that an arrest warrant has been issued by a judicial authority. While Interpol cannot enforce the notice, many countries consider it a valid request for a provisional arrest while they seek extradition.
Months ago the government issued an arrest warrant for Jathran himself, accusing him of damaging the state by shutting down oil exports that account for more than 90 percent of state revenues. Libya has lost more than $7 billion in revenues since the protest began, according to government figures.
Posted by هدى السرارى at 3:51 م ليست هناك تعليقات: Links to this post

The International Organisation for Migration (IOM) Malaysia will conduct the ongoing Out of Country Voting process for Libya's 2013 Constituent Assembly Elections in charge of drafting the country's constitution.The voting will be held at the Libyan School, 317 E, Jalan Ampang here, from 8am to 6pm for three days, beginning Feb 15.According to a statement issued by the Embassy of Libya here, Malaysia was selected by the Libya High National Election Commission (HNEC) to organise the event due to a large number of Libyans in the country.Malaysian media interested to cover the event can register and get the access card from IOM.IOM, an intergovernmental organisation established in 1951, is committed to the principle that humane and orderly migration benefits migrants and society. For details and inquiries, contact the national advisor in Malaysia at 019-3751078 or visit the HNEC website: www.hnec.ly.Tripoli-based HNEC is a national body responsible for developing regulations and policies to govern the elections, including the drawing up of electoral districts.According to the website, as at July 8, last year, 1,764,840 voters had registered.Meanwhile, online newspaper, Libya Herald has reported that the elections to the 60-member constitution-drafting committee was scheduled to be held on Feb 20.
Posted by هدى السرارى at 3:47 م ليست هناك تعليقات: Links to this post

By Libya Herald staff.
Tripoli, 13 February 2014:
Libya’s sovereign wealth fund, the Libyan Investment Authority (LIA) is undergoing a major restructure of senior management personnel.
The LIA is now advertising for a new Chief Executive Officer, as well as looking for a new Head of Treasury and Budget Stabilisation Fund and a Senior Advisor for Finance and Control. New heads of departments for human resources and communications and PR are also being sought.
In advertisements f0r the roles, the LIA said it was seeking to revitalise operations, promote a new strategy to foster economic stability and protect economic growth in Libya.
The fund manages an estimated $60 billion.

Posted by هدى السرارى at 3:45 م ليست هناك تعليقات: Links to this post 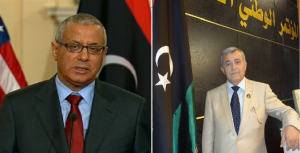 shabab libya
The February 7 deadline for the General National Congress (GNC) has passed with news trickling in of a handful of legislators resigning in protest but no significant movement to shake the country out of its political paralysis and regenerate momentum for its transition to democracy. The streets, however, are grumbling as political maneuvers continue. Three critical dates approach on which Libya’s trajectory hinges. That these crucial decisions must be taken in a span of less than a week in a country where institutions lack capacity and elected bodies lack leadership sparks fears of a serious collapse of a politically negotiated transition.
February 14: Civil society organizations, inexperienced but enthusiastic, are tirelessly organizing themselves to launch mass demonstrations on February 14 against the GNC to call for new presidential and legislative elections to be held as soon as possible. Skeptics may question the efficacy of such an approach, considering the disparate nature of demonstrations held in Libya leading up to the GNC’s expiration date. While they have been numerous, the turnouts have been less than impressive.

Observers should bear in mind, however, that activists are operating in a climate of intimidation. Tensions escalated in the lead up to what was supposed to be the dissolution of the legislature, including with the Grand Mufti discouraging action against the GNC. Legislators are not yet entirely off the hook, however, as opposition among civil society groups rises over the passage of an amendment to the penal law sentencing anyone seen as insulting the GNC, government, or judiciary to jail time. The brewing anger could culminate on February 14 in a compelling show of outrage in the Libyan streets.

Posted by هدى السرارى at 3:35 م ليست هناك تعليقات: Links to this post

Libyan Defense Minister Abduallah al-Theni said "The Supreme Leader of the Armed Forces [Nouri Abusahmain] has ordered the arrest of the officers and politicians who tried to stage a coup against legitimacy."

World Bulletin / News Desk
Libya has foiled an attempt by a group of former army officers and politicians to stage a military coup, Defense Minister Abduallah al-Theni said on Wednesday.
"The Supreme Leader of the Armed Forces [Nouri Abusahmain] has ordered the arrest of the officers and politicians who tried to stage a coup against legitimacy," al-Theni told the private Ahrar Libya TV.
He added that the Libyan army and revolutionaries were currently hunting down the leaders of the failed coup attempt.
Libyan lawmaker Abdel Rahman al-Dibani told Anadolu Agency earlier that the General National Congress (the country's interim parliament) had received information from Libyan military intelligence regarding attempts by a group of army officers and politicians to form a military council and overthrow the country's interim parliament and government.
According to informed sources, parliament canceled its scheduled Tuesday morning session due to the alleged coup attempt.
An earlier decision by parliament to extend its mandate by one year ended up triggering a political crisis in the already-tense country.
The current parliament's tenure should have come to an end on February 7, but some observers – both inside and outside parliament –say the assembly has not yet achieved its mission.
Libya's parliament was formed in July 2012 with the aim of implementing a transitional roadmap that includes the appointment of a prime minister and the election of a constitution-drafting committee.

Posted by هدى السرارى at 3:30 م ليست هناك تعليقات: Links to this post Posted by هدى السرارى at 3:09 م ليست هناك تعليقات: Links to this post