WSJ
Trading screens may have been dominated by headlines about Ukraine in recent times, but for oil traders there is a longer-running supply-side issue: Libya.
It’s been three years since the fall of Moammar Ghadafi, who was swept up by the Arab Spring. Libya, a major producer of coveted sweet crude, has since been in a state of turmoil, with violence, division and political unrest continuing to this day.
The oil industry in the country with Africa’s largest reserves has been in suspended animation. The effect on companies operating there has been brutal.
Now there may be signs of a breakthrough. Crude flows have resumed from major oil-producing fields of El Sharara, El Feel and Wafa and the pipelines linking them to the Zawiya exports terminal, The Wall Street Journal’s Benoit Faucon reports.
The fields together produce 500,000 barrels a day, and their resumption will push total Libyan daily crude output up to 750,000 barrels.
There are two caveats. Although such a large increase is welcome, this still leaves Libyan producing at half its normal capacity. Also, this is far from the first time that talk of normality has emerged from Libya.
MELT
Six rapidly melting glaciers in Antarctica are destabilizing one of the world’s largest ice sheets and, if unchecked, this could release enough water to raise sea levels world-wide significantly in centuries to come.
Who says? Researchers at the National Aeronautics and Space Administration’s Jet Propulsion Laboratory and the University of California. They state that the glacial retreat may already have reached the point of no return, the Journal’s Robert Lee Hotz reports.
In the U.S., meanwhile, The White House rollout of a climate-change report has been met with marked indifference by the polled populace. Perhaps they are being wooed by editorials talking of scare tactics and “unscientific panic.”
Presidential would-be Marco Rubio knows on which side of the fence he sits, disclaiming the idea that the consequences of climate change can be averted provided governments act aggressively.
TAX
Unexpected news from the turkey pen: this year, they are voting for Christmas.
Oklahoma oil man George Kaiser is breaking with fellow energy executives in asking the state to raise taxes on oil companies, including his own.
Energy companies in Oklahoma pay 7% tax on oil and gas revenue. But to encourage drilling with more costly shale wells, the rate is 1% for the first four years.

Mr. Kaiser believes a higher tax on oil-and-gas production could help the state pay for education and much needed infrastructure improvements, the Journal’s Daniel Gilbert reports.
Posted by هدى السرارى at 5:34 م ليست هناك تعليقات: Links to this post

Austrian oil and gas company OMV (OMV.VI) said Tuesday that its clean net income--adjusted for changes in stock levels--fell nearly 14% in the first quarter mainly due to political instability at its Libyan operations.

Clean current cost of supply net income was 302 million euros ($415.6 million), down from EUR349 million in the year-earlier quarter. First-quarter sales declined around 8.8% to EUR9.83 billion.

Outages in Libya due to the security situation continue to weigh on overall production, even as new production from OMV's Gullfaks asset in Norway came fully on stream. The company said output in Libya, which makes up less than 10% of the company's total production, has been shut from mid-March.

OMV has been diversifying into northern Europe, Romania and other parts of the world and said it would continue its cooperation with Gazprom, despite growing pressure for tougher sanctions on Russia.

For the full year, OMV said output would be between 310,000 and 330,000 barrels of oil equivalent per day, depending on the resumption of production in Libya.
Posted by هدى السرارى at 5:26 م ليست هناك تعليقات: Links to this post

DW
After roughly three weeks in captivity, Jordan’s ambassador to Libya has been freed. The Libyan government secured his release by agreeing to extradite a jailed Libyan jihadist, the key demand of his kidnappers.


Libya's foreign ministry confirmed early Tuesday that Fawaz al-Itan, the Jordanian ambassador to the North African country, had been released by his captors, according to Libyan state television. The diplomat was reportedly already en route to Jordan, al Arabiya television said.
"The ambassador is doing well and he is now making his way back to his country," Jordan's foreign minister, Nasser Judeh, was quoted as saying.
In mid-April, #link:17571920:masked gunmen abducted al-Itan in Tripoli while he was on his way to work at the embassy (pictured above). They shot at his car, wounding the driver.
The kidnappers reportedly left a message on the ambassador's cell phone, which was left behind in his car, in which they demanded the release of Mohamed Saeed al-Darsi. The Libyan Islamist militant had been sentenced to life in prison for a 2007 plot to blow up Jordan's main airport.
#link:17612904:The Libyan government reportedly ratified the extradition agreement with Jordan on Thursday night.
Violence and lawlessness have gripped Libya since the overthrow of the Gadhafi regime in 2011 by NATO-backed rebels. Foreign diplomats have become targets in Libya, too. Since January, five Egyptian diplomats, a Tunisian diplomat and a south Korean trade official have been kidnapped.
Posted by هدى السرارى at 5:22 م ليست هناك تعليقات: Links to this post 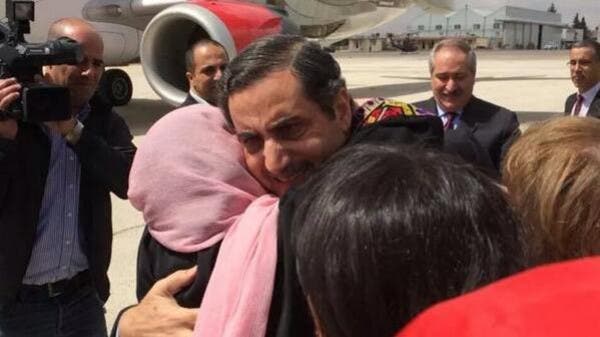