(Reuters) - Employees at one of Libya's biggest banks began a two-day strike on Wednesday, demanding greater protection after a colleague was shot dead at work, staff and state media said.

Libya's government has been unable to control militias who helped oust Muammar Gaddafi in 2011 and refuse to disarm, and alongside the deteriorating security situation, the number of bank robberies have increased in the past few months.
State-owned Jumhuriya, which employs more than 5,000 staff in 146 branches, according to its website, is the main bank through which the government pays hundreds of thousands of civil servants.

State news agency LANA said Jumhuriya staff across the country had gone on strike to condemn the killing of a bank employee in Sabha in the south, accusing the government of failing to protect the branches.

"One of our colleagues was killed yesterday while he was doing his job," Fatthi Al-Fandi, a bank employee in the capital Tripoli told Reuters. "One of us could be the next."

Eurasia news
A Libyan official on Tuesday denied reports about the closure of a border crossing with Egypt.
“The Imsaad crossing has not been closed,” Mohamed al-Habouni, the acting director of the border crossing, told Anadolu Agency.
Local Libyan media had reported that Libya had closed the border terminal with Egypt over what it described as Egypt’s failure to allow the crossing of residents of Libyan border areas without a visa into Egypt under a signed agreement between the two sides.
Al-Habouni claimed that Egyptian authorities had prevented residents of the eastern Torbuk city from crossing into Egypt without obtaining a visa.
By Moataz al-Majbari, AA

Turkish press
TRIPOLI – Libya's parliament speaker Nouri Abusahmain intends to step down from office over a widely circulated video showing him being questioned by unknown men about the presence of two women at his house at night, one lawmaker said.

Around 30 MPs have submitted a memo to the leadership of the General National Congress, Libya's interim parliament, asking Abusahmain to resign to safeguard and the dignity and integrity of congress until the end of the transitional period, the lawmaker, who asked to remain anonymous, told Anadolu Agency.

According to the legislator, they have been notified that Abusahmain intends to tender his resignation within hours.

Speaker Abusahmain could not be immediately reached for comment on the report.

A video, widely circulated since late March, shows a confused Abusahmain, in his nightclothes, being questioned at his Tripoli home by unknown gunmen about the presence of two women at such a late hour of the night.

In a later shot, a nervous, suited-up Abusahmain appeared in one office being grilled on the same incident.

He described the two women as parliament personnel who had asked to meet him to present important documents on an assassination plot targeting him and other lawmakers.

The video had prompted Libyan prosecutor general Abdel-Qader Radwan to order a probe into the incident.
Posted by هدى السرارى at 5:07 م ليست هناك تعليقات: KUALA LUMPUR: Hundreds of guests attended the celebration party to mark the third anniversary of the Feb 17 Uprising that liberated Libya from the rule of Muammar Gaddafi.

The event, organised by the Libyan embassy at a hotel here, was also in remembrance of the 62nd Anniversary of the Middle Eastern country's independence.
Deputy Minister of Domestic Trade, Co-operatives and Consumerism Datuk Seri Ahmad Bashah Md Hanipah represented the Malaysian Government and its people as he joined Libyan ambassador Dr Anwar A.Y. Elfeitori in a cake-cutting ceremony to mark the occasion.
The guests were treated to a spread of Middle-Eastern delicacies, such as falafel, shish tawook, uzi lamb rice and chicken shawarma.

(Reuters) - A rebel group in eastern Libya has agreed with the government to end its seizure of vital oil ports within days, a senior leader told Reuters on Tuesday, raising hopes for an end to an eight-month stalemate that has dried up state income and fuelled chaos.
There was no immediate comment from the Tripoli government which has been trying since summer to end the blockage of three eastern ports, which previously accounted for more than 600,000 barrels a day of oil exports.
The oil conflict is just one aspect of the turmoil in the OPEC producer where the weak central government is unable to control militias that helped topple Muammar Gaddafi in 2011 but refuse to disarm and are trying to grab a share of power or oil wealth.
Still, markets are likely to remain skeptical about whether the oil ports will finally reopen after a similar deal fell through in December at the last minute.
Talks with the eastern rebels had moved forward after the U.S. Navy captured a tanker that had loaded oil at a rebel port, killing the hopes of rebel leaders to sell crude bypassing Tripoli and pressuring them to agree on a deal.
The government had earlier met a rebel demand by releasing three of its fighters who had boarded the tanker at Es Sider, one of three ports seized by the group in August to press for autonomy and a greater share of oil wealth.
"The oil port issue will be solved within days," Abb-Rabbo al-Barassi, self-declared prime minister of the rebel group, said. "We agreed on all issues with the government in Tripoli."
A government delegation would visit the group's home base Ajdabiya in eastern Libya within two days to hammer out the details, he told Reuters by phone. He gave no details.
The group's top leader Ibrahim Jathran had minutes earlier told a rebel television station his group had reached a solution benefiting the people of Cyrenaica, the east's historic name, and "all honorable Libyans".
"This agreement will upset all those who don't want the good for Libya and its people but it will make happy all national thinking Libyans. That's important for us. That's what we strive for," Jathran said in a speech lasting eight minutes.
He gave no details or date but swapped his often martial tone for a more conciliatory one, addressing "all Libyans" and stressing the need for consensus and stability.
Jathran repeated the rebel demands for giving the east a share of oil and combating oil corruption but also talked about reaching out to all regions and cities to build a stable Libya.
MODERATE TONE
Western powers worry the conflict over oil will fuel instability or even break up the vast desert country as many in the east complain of decades of neglect at the hand of western cities such as the capital Tripoli or the main port Misrata.
Jathran mentioned his group's desire to reinstate the 1951 constitution from the era of King Idris, who had preceded Gaddafi, and introduced a federalist system sharing power between regions.
But compared to other speeches, Jathran focused this time on dialogue.
"This night I'm addressing the people of Libya as a whole to talk about some truths and announce some joyous issues not only for Cyrenaica but the whole of Libya," a clean-shaven Jathran said, dressed in a suit and tie - in contrast to his days as rebel commander while fighting Gaddafi in 2011, when he wore a military uniform and sported a beard.
Jathran, who is in his early 30s, did not mention a previous demand to the government to return the oil tanker.
A deal, if confirmed, would not necessarily end the shutdown of several oilfields in western Libya by a different set of protesters.
In contrast to the east, protesters at western oil facilities such as the closed El Sharara field are divided into in small groups with different demands and lacking joint leadership.
Output has fallen to around 150,000 bpd from 1.4 million bpd in July when a wave of protests started across Libya. The loss of oil revenues has triggered the worst budget crisis for decades with the central bank burning through its reserves to keep the country afloat.
CHAOS
With no real army, Libyan authorities are struggling to control militias and armed tribesmen who helped to oust Gaddafi in the 2011 civil war but have become political players controlling territory and seizing oil facilities at will.
On Monday, Libya's attorney general ordered the release of three rebel fighters in a gesture to the rebels.
Three weeks ago, the rebel militia embarrassed Tripoli by loading crude onto a tanker named "Morning Glory". U.S. special forces troops later stormed the ship in international waters and returned it to Libya.
Government and the parliament had told the rebels to negotiate an end to their port blockade or face a military offensive.
But government officials and key lawmakers have stopped talking about military action for more than a week, paving the way for more talks.
The army would have struggled to tackle Jathran's forces anyway as they are battle-hardened from the civil war.
The rebel television station showed Jathran's men giving the three fighters heroes' welcomes after they arrived at Benghazi airport. Dozens of vehicles accompanied them from the eastern city to Ajdabiya, as fighters fired their Kalashnikovs into the air.
His forces and other militias refuse to surrender their weapons and often use force or control of oil facilities to make demands on a state whose army is still being trained by Western governments.
Those governments, which backed NATO air strikes to help the 2011 anti-Gaddafi revolt, are pressing the factions to reach a political settlement. But Libya has lurched from crisis to crisis over the last year.
Oil production has fallen to a trickle due to the port seizures and protests at major oil fields. 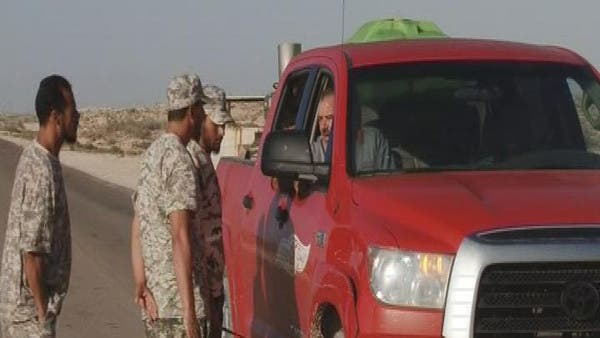