Washington accuses Tehran of sending personnel to help President al-Assad's forces in their fight against opposition. 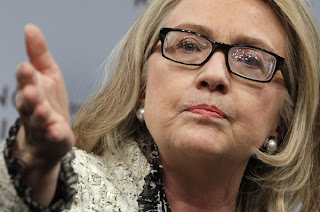 Hillary Clinton, US secretary of state, says Russia is continuing to prop up the Syrian government [Reuters]

Hillary Clinton, the outgoing US secretary of state, has warned that Iran is stepping up its support for Syrian President Bashar al-Assad while Russia is continuing to send money and arms to the regime.
Clinton on Thursday accused Tehran of sending into Syria "more personnel" to support and advise military security forces in their fight against the armed opposition.
In her last media interview as secretary of state, Clinton said there was "a lot of concern that they are increasing the quality of weapons, because Assad is using up the weapons, so it's numbers and it's material".
"The Iranians have made it clear for some time that keeping Assad in power was one of their highest priorities," she told a roundtable of journalists.
"The Iranians have been actively involved from the very beginning. It appears that they may be increasing that involvement and that is a matter of concern to us."
Her comments came as Syria threatened to retaliate for an Israeli air attack and Iran said there will be repercussions for Israel over Wednesday's raid.
Clinton said that despite US efforts to bring Moscow on board to work for an international solution to the 22-month war in Syria that has claimed some 60,000 lives, Russia was continuing to prop up the regime.
Russians 'not passive'
"The Russians are not passive bystanders in their support for Assad. They have been much more active on a number of fronts," she said.
"Their defence of Assad in the Security Council has been the most public, visible sign of that. But there are other ways that they have tried to protect the regime," she added.
"We have reason to believe that the Russians continue to supply financial and military assistance in the form of equipment to Assad."

Posted by هدى السرارى at 9:54 م ليست هناك تعليقات: Links to this post

Posted by هدى السرارى at 9:50 م ليست هناك تعليقات: Links to this post

At least five people, including four Lebanese soldiers, have been killed in clashes in the Bekaa Valley.

Posted by هدى السرارى at 9:46 م ليست هناك تعليقات: Links to this post 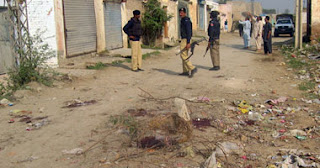 Posted by هدى السرارى at 9:35 م ليست هناك تعليقات: Links to this post 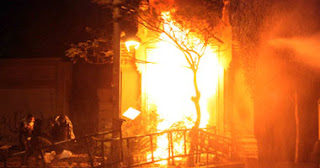 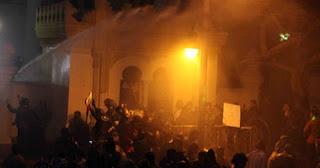 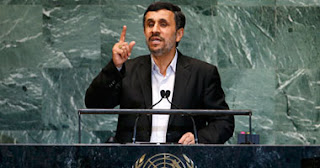 Posted by هدى السرارى at 9:16 م ليست هناك تعليقات: Links to this post 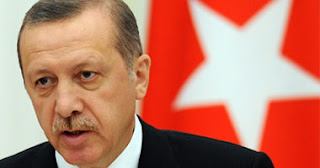 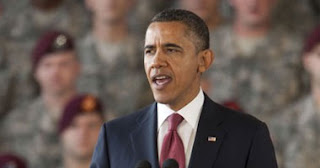 Posted by هدى السرارى at 9:05 م ليست هناك تعليقات: Links to this post 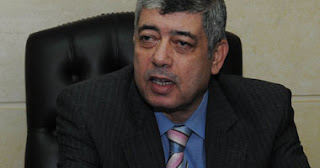 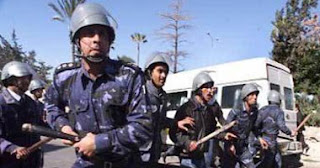 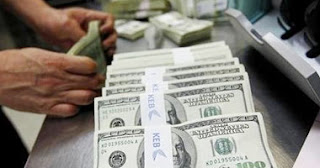 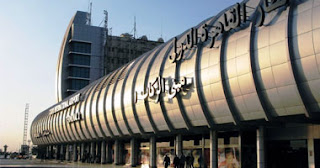 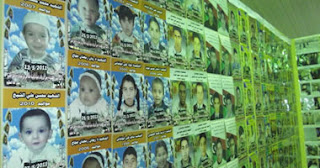 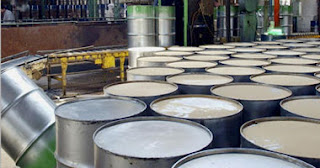 Posted by هدى السرارى at 7:44 م ليست هناك تعليقات: Links to this post

Egyptian protesters have clashed with police outside the presidential palace in Cairo, after a week of violence in which more than 60 people were killed.
The riot police used tear gas and water cannon to try to drive back the crowds throwing rocks and petrol bombs.
Thousands also rallied in Port Said - one year after football riots in the city, which killed 74 people.
The protesters accuse Islamist President Mohammed Morsi of betraying the 2011 uprising - a claim he denies.
Mr Morsi's supporters say the demonstrators are trying to used the power of the street to bring down the country's first democratically elected president, the BBC's Yolande Knell in Cairo reports.
Sexual assaults
On Friday, thousands of people chanted "Leave, leave, Morsi!" as they gathered outside the presidential palace - in the north of the capital.
Some of the demonstrators then began throwing Molotov cocktails over the palace walls and lighting fires in the streets.
Skirmishes were reported close to the capital's Tahrir Square, where thousands more marched, urging Mr Morsi to leave.
A demonstration was also held in Port Said, at the northern end of the Suez Canal.
The city has seen the worst of the violence over the past week, in clashes sparked by death sentences imposed on 21 local people in connection with the football riots.
On Thursday, leaders of some of the main political factions condemned the violence. But youth groups later still called for more street protests.
In a separate development, human rights officials have expressed alarm over a rise in sexual violence against women in Cairo.
According to the UN's Office of the High Commissioner for Human Rights, 25 women have been sexually assaulted, mainly in Tahrir Square, since the protests erupted.
Michelle Bachelet, of the UN's Entity for Gender Equality and the Empowerment of Women, said she was "deeply disturbed by the gravity of [the] recent attacks".
Sexual assaults against women around Tahrir Square was widely reported during the uprising there which eventually unseated Hosni Mubarak.
'Collapse of state'
The current unrest began on 24 January in Cairo on the eve of the second anniversary of the revolution and has spread to several cities.
Protesters accuse President Morsi, a member of the Islamist Muslim Brotherhood, of imposing a new form of authoritarianism and betraying the values of their uprising two years ago.
On Tuesday, Egyptian army chief Gen Abdul Fattah al-Sisi warned that the political crisis could lead to the collapse of the state.
http://goo.gl/XLneC

Posted by هدى السرارى at 7:30 م ليست هناك تعليقات: Links to this post

A suicide bomber has attacked the US embassy in the Turkish capital Ankara, killing a guard, officials say.
The blast, at a side entrance of the heavily guarded compound, sent debris flying into the street.
The US has warned its citizens not to visit diplomatic missions in Turkey until further notice.
No group has said it carried out the attack, but Interior Minister Muammer Guler said the bomber, who also died, was a far-left militant.
Mr Guler suggested that the bomber might have been a member of the outlawed Revolutionary People's Liberation Party-Front (DHKP-C).
He also said the attacker was believed to have been a Turkish national.
Turkey and the US have denounced the incident as terrorism.
Ankara was last hit by a suicide bombing in September 2011, in an attack blamed on Kurdish militants.
A number of illegal groups ranging from Kurdish separatists to leftist and Islamist militants have launched attacks in Turkey in recent years.
'Like an earthquake'
US ambassador Francis Ricciardone briefed reporters outside the embassy shortly after the attack.
He said a guard at the embassy's side entrance had been killed in the blast at 13:15 (11:15 GMT), and a Turkish citizen had been wounded.
Turkish officials said the bomber had also died.
Other reports said three people were injured, one of them seriously.
Witnesses said a woman with her face covered in blood had been taken away in an ambulance.
Vatan newspaper's offices are opposite the blast scene, and their reporter Kıvanc El witnessed the incident.
"I was sitting in front of my computer. I heard a loud bang, and the whole building shook, as if it was an earthquake," he told the BBC's Turkish service.
"There was a cloud of smoke and I saw people scuttling away in panic. Ran downstairs in 30 seconds.
"There were two bodies lying on the floor, just inside the entrance with body parts scattered around. The fortified entrance had partially collapsed."
Banned Marxist group
Prime Minister Recep Tayyip Erdogan made a televised statement in which he called for a global effort to combat terrorism.
"This attack should remind us of the necessity of working together against terror. The roots of terror can only be cut by collaborating against terror together at an international level," he said.
The US state department said it was working with Turkish police to make a full assessment of the damage.
The area around the embassy was swarming with police, said journalist Golnar Motevalli in Ankara.
Turkish broadcaster NTV named the suicide bomber as Ecevit Sanli, a DHKP-C member.
The channel said he had taken part in an attack on a club for military personnel in Istanbul in 1997, for which he was sent to jail.
The DHKP-C is designated a terrorist organisation in the US and Europe.
It has been blamed for a number of attacks since the 1970s, including some on US diplomatic missions.
Turkish police carried out a series of raids on suspected members in January.
The embassy building is heavily protected but the US has had long-standing plans to move its compound elsewhere for security reasons.
It was recently reported to be in the final stages of a deal to choose an alternative location.
The German and French embassies are situated close to the current building.
http://goo.gl/HxYqL

Posted by هدى السرارى at 7:24 م ليست هناك تعليقات: Links to this post

Posted by هدى السرارى at 1:13 م ليست هناك تعليقات: Links to this post