Tens of thousands of mourners have gathered in Tunisia's capital, Tunis, ahead of the burial of assassinated opposition leader Chokri Belaid.
Police have fired tear gas at protesters in Tunis and the town of Gafsa. A general strike is also being observed.
Mr Belaid was shot dead on Wednesday by a gunman who fled on a motorcycle.
Unions say the government led by the Islamist Ennahda party is to blame for the killing, an accusation it denies.
Prime Minister Hamadi Jebali has tried to defuse tensions by calling for a non-partisan technocratic government. However, his party has refused to accept this.
General strike

Some 3,000 people initially gathered outside the building in the Djebel Jelloud suburb of Tunis where Mr Belaid's flower-covered coffin lay.
Crowds chanted slogans accusing the Ennahda-led government of murdering Mr Belaid 48.
"With our blood and our souls we will sacrifice ourselves for the martyr," the mourners shouted.
Thousands more people then joined the coffin as it was taken on a funeral procession towards the nearby cemetery of el-Jellaz.
Many more people are expected to take to the streets of the capital after Friday prayers and ahead of the burial in the afternoon.
Hundreds of riot police have been deployed in Habib Bourguiba Avenue, the scene of earlier violence.
Police fired tear gas to break up youths attacking cars close to el-Jellaz cemetery, and also at protesters near the interior ministry.
Elsewhere in Tunis, many shops are shut and most of the public transport is not running.
This is the country's first general strike in 35 years.
A number of flights to and from Tunis-Carthage airport have been cancelled.
Tunisian state TV said universities had been ordered to suspend lectures on Saturday and Sunday, while France said it would close its schools in Tunis.
In Sidi Bouzid, some 10,000 people also gathered to mourn Mr Belaid.
In the central town of Gafsa, tear gas was fired amid clashes between protesters and security forces, witnesses and local media said.
The BBC's Wyre Davies, in Tunis, says it is difficult to overestimate the tension on the streets of Tunis, Sfax and other provincial towns - a tension that has been simmering for many months between liberal, secular Tunisians and the Islamist-led government.
He says that people who thought the violence and division had ended as the Arab Spring swept through the country almost exactly two years ago now find themselves protesting on the same streets, fighting with riot police and accusing the Islamist-led government of stealing their revolution.
Policeman killed

Ennahda denies opposition claims that it was behind the killing.
Government critics say that, in recent months, Ennahda has allowed ultra-conservative Muslim groups to impose their will and opinions on what was always regarded as a bastion of Arab secularism.
Mr Belaid was the victim of the first political assassination in Tunisia since the Arab Spring uprising in 2011.
Thousands of people later rallied outside the interior ministry in Tunis, many chanting slogans urging the government to stand down and calling for a new revolution.
In the centre of the capital, a police officer was killed during clashes between police and opposition supporters.
Also on Thursday, demonstrators observing a symbolic funeral for Mr Belaid outside the governor's office in Gafsa clashed with police.
One policeman was said to be in a coma on Friday after being dragged from his car and beaten in the town, Agence France-Presse news agency
reported.
In Sfax, crowds ransacked a number of shops on Thursday.
Tunisian media reported that more than a dozen Ennahda offices across the country were attacked overnight.
Earlier, four opposition groups - including Mr Belaid's Popular Front - announced that they were pulling out of the country's constituent assembly in protest.
Mr Belaid was a respected human rights lawyer, and a left-wing secular opponent of the government which took power after the overthrow of long-serving ruler Zine el-Abidine Ben Ali.
Current President Moncef Marzouki said the assassination should not affect Tunisia's revolution, cutting short a visit to France and cancelling a trip to Egypt to return home to deal with the crisis.
http://goo.gl/M4t53 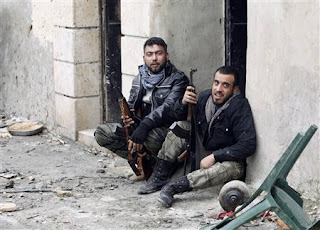 Free Syrian Army fighters carry their weapons as they sit on the ground at the Sheikh Saeed district, near a cement factory in Aleppo, February 7, 2013.

WASHINGTON | Fri Feb 8, 2013 6:21am EST
(Reuters) - Pentagon leaders told Congress on Thursday that they had supported a recommendation to arm Syrian rebels promoted by the State Department and CIA but which President Barack Obama ultimately decided against.
Obama's government has limited its support to non-lethal aid for the rebels who, despite receiving weapons from countries like Qatar and Saudi Arabia, are poorly armed compared to Syrian President Bashar al-Assad's army and loyalist militias.
Syria's 22-month-long conflict has killed an estimated 60,000 people.
Senator John McCain, a Republican from Arizona, has championed greater U.S. involvement and chided the Obama administration at a hearing, asking Pentagon leaders: "How many more have to die before you recommend military action?"
He then pressed Defense Secretary Leon Panetta and General Martin Dempsey, the chairman of the U.S. military's Joint Chiefs of Staff, about whether they backed the recommendation by the State Department and CIA chiefs last year to arm the rebels.
Panetta and Dempsey said they had backed the recommendation, and later in the hearing, the defense secretary elaborated.
"Obviously there were a number of factors that were involved here that ultimately led to the president's decision to make (the aid) non-lethal," Panetta said, adding he supported Obama's decision.
The comments were the first public acknowledgement of Pentagon support to arm the rebels since the New York Times reported on February 2 about the plan developed last summer by Hillary Clinton and David Petraeus, who have since left their jobs at the State Department and CIA, respectively.
The defense chiefs' testimony also suggested that White House opposition alone may have been enough to override the position of most major U.S. foreign policy and security agencies - the State and Defense departments, and the CIA.
CONCERN ABOUT DEEPER U.S. INVOLVEMENT
The Times said that the plan to arm and train rebels was rebuffed by the White House over concerns it could draw the United States into the Syrian conflict and that the arms could fall into the wrong hands.
The questions about U.S. policy in Syria came during a hearing focusing on Libya, with Pentagon leaders defending their response to last year's deadly attack on the U.S. consulate in Benghazi.
Republican lawmakers raised questions about whether the reaction was too slow and whether Obama was not engaged enough during the incident, choosing to get updates on the crisis from staff instead of military leaders.
Panetta and Dempsey said U.S. forces could not have reached Libya in time to prevent the deaths of the U.S. ambassador and three other Americans on September 11, 2012, and assured that Obama was kept in the loop.
Panetta also stressed that it was also not the U.S. military's responsibility to be able to immediately respond anywhere in the world to a crisis. There was no intelligence about a specific plan to attack the consulate, he and Dempsey noted.
"The United States military ... is not and, frankly, should not be a 911 service capable of arriving on the scene within minutes to every possible contingency around the world," he said, referring to the 911 U.S. emergency phone number.
Panetta, who is soon retiring, also used the hearing as an opportunity to take more parting shots at Congress over its inability to reach a budget deal needed to avert automatic spending cuts that will hit the military.
Panetta warned those cuts, due to start kicking in next month, could create a "readiness crisis" for the military and urged lawmakers to strike a deal.
"I cannot imagine that people would stand by and deliberately hurt this country in terms of our national defense by letting this take place," he said.
It was likely to be Panetta's last hearing before he retires, and despite a sometimes accusatory tone from lawmakers, Republicans and Democrats praised his work as Pentagon chief and, previously, as CIA director.
The man nominated to be Panetta's successor, former Republican Senator Chuck Hagel, faces stiff Republican resistance but is expected to win Senate confirmation. 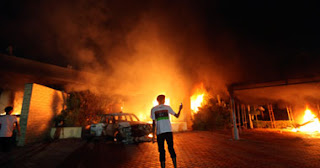 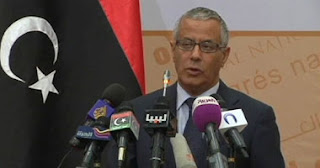