#Angelina_Jolie had double mastectomy to reduce risk of breast cancer 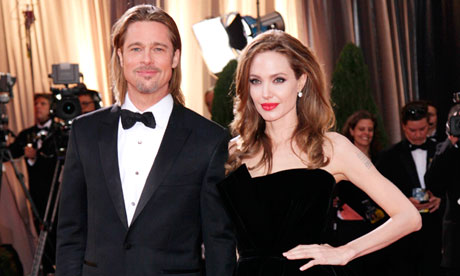 Angelina Jolie with Brad Pitt, who she said was with her for 'every minute' of the double mastectomy and breast reconstruction surgery. Photograph: Broadimage/Rex Features
Angelina Jolie has revealed she has had a preventive double mastectomy to reduce her risk of developing breast cancer.
Health campaigners praised her decision to go public with the news, which she said was prompted by a desire to encourage other women to get gene-tested and to raise awareness of the options available to those at risk.
The actor has a defective gene, BRCA1, which doctors told her had increased her risk of developing breast cancer to 87%, and her risk of ovarian cancer, the disease that killed her mother at the age of 56, to 50%, she wrote in the New York Times.
The surgery, which began in February, has reduced Jolie's risk of breast cancer to under 5%, she said. "I can tell my children that they don't need to fear they will lose me to breast cancer," she wrote. "It is reassuring that they see nothing that makes them uncomfortable. They can see my small scars and that's it. Everything else is just Mommy, the same as she always was. And they know that I love them and will do anything to be with them as long as I can. On a personal note, I do not feel any less of a woman. I feel empowered that I made a strong choice that in no way diminishes my femininity."
The 37-year-old, who has six children – three by Brad Pitt, who was by her side for "every minute of the surgeries", and three adopted – finished three months of medical procedures on 27 April. She said she first had "nipple delay" to maximise the chances of saving her nipples, before breast tissue removal and, nine weeks later, reconstruction. Jolie wrote: "I choose not to keep my story private because there are many women who do not know that they might be living under the shadow of cancer."
Wendy Watson, who founded the UK's National Hereditary Breast Cancer Helpline, welcomed Jolie's decision to write publicly about her operation.
"It is excellent, because it is the highest profile you can get for it," she said. "It raises the profile for other women to look to if they have a family history and would benefit from being screened more frequently, or having surgery or having a genetic test," she said. "She probably feels that undergoing the operation is common sense but it probably does take a certain amount of courage to face it."
The UK foreign secretary, William Hague, who visited refugee camps in the Democratic Republic of the Congo with Jolie in March, said she would be "an inspiration to many". "She is a courageous lady and a very professional lady. She's done a lot of work with me in recent months," he told Sky News. Jolie has worked with refugees for years and last year was appointed as a special envoy for the UN high commissioner for refugees. Hague said: "She gave no sign that she was undergoing such treatment and I think she's a very brave lady, not only to carry on with her work so well during such treatment, but also to write about it now and talk about it."
Dr Richard Francis, head of research at Breakthrough Breast Cancer, said that faults in the BRCA1 gene, which on average put women at a 65% risk of developing breast cancer, were rare and in most cases were linked to family history. He cautioned that a preventative mastectomy would not necessarily be the appropriate treatment for everyone with the gene. "For women like Angelina it's important that they are made fully aware of all the options that are available, including risk-reducing surgery and extra breast screening.
"Though Angelina decided that a preventative mastectomy was the right choice for her, this may not be the case for another woman in a similar situation.
"We urge anyone who is worried about their risk of breast cancer to talk it through with their doctor."