(Reuters) - Libyan tribesmen have ended their blockade of the El Sharara oilfield but production cannot resume until a separate protest at a connecting pipeline is resolved, an oil official said on Sunday.
In February, tribesmen and government security guards shut down the 340,000 barrels-a-day field in the remote south to make financial and political demands, worsening a blockage of oil ports in the east.
"The protesters who closed the field have left but we cannot resume work because the valves are still closed," El Sharara's field manager Hassan Sadiq told Reuters.
Sadiq said there were negotiations aimed at ending the closure of the pipeline valves in the western mountains and engineers hoped to resume pumping within a week.
A different group of protesters in the western Zintan region had closed the pipelines to make their own financial and political demands. The El Sharara oilfield has been repeatedly shut down by protesters.
Three years after the revolt that toppled Muammar Gaddafi, Libya's oil infrastructure is a common target for protests, shutdowns and strikes by brigades of former rebels who refuse to disarm or recognise the state's authority.
Oil and gas are the main source of national income and of the hard currency needed to fund essential food imports.

Production was around 1.4 million bpd until mid-2013 when the protests began, reducing it to little over 200,000 bpd. (Reporting by Ahmed Elumami; Editing by Ulf Laessing and Ruth Pitchford)
Posted by هدى السرارى at 5:44 م ليست هناك تعليقات: Links to this post

Posted by هدى السرارى at 4:40 م ليست هناك تعليقات: Links to this post 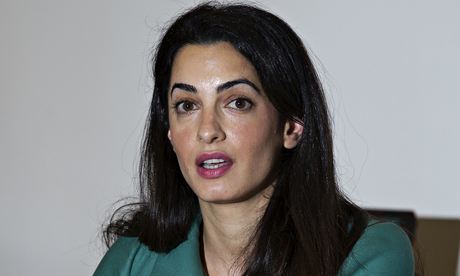 Amal Alamuddin: 'The ICC made its decision despite the fact that Libya did not allow us a single visit to Senussi.' Photograph: Justin Tallis/AFP/Getty Images

the guardian
Amal Alamuddin was pictured across the world last month after the announcement of her engagement to George Clooney after a whirlwind romance. Soon she could return to the front pages in a more controversial role – when she stands up in court to represent Muammar Gaddafi's notorious spy chief in a case that could scupper the reputation of the international criminal court.
Abdullah al Senussi is no one's idea of a poster boy for justice. As Gaddafi's intelligence chief and right-hand man for four decades, the 64-year-old supervised torture, assassinations and town-square hangings.
Many Libyans blame him for the massacre of 1,200 inmates at Tripoli's Abu Salem prison, a Paris court has convicted him in absentia for the bombing of a French airliner in 1989, and Scottish police are to interview him over allegations of masterminding the Lockerbie bombing. He fled Libya during the 2011 Arab spring revolution, but was caught in Mauritania and returned to Libya. And that is where the trouble began.
Senussi was charged – along with Gaddafi's playboy son, Saif al-Islam – with war crimes and crimes against humanity by the ICC. Under the rules of the United Nations, which ordered the case, the Hague court was to hold the trial unless Libya could prove itself capable of doing the job itself. In October, Libya was given that approval, despite allegations that Senussi had been mistreated, and Libya's refusal to let Alamuddin or any of his ICC-appointed defence team visit him, which she says should have been a red flag to the Hague.
"A scary precedent has been set," she told the Observer. "The ICC made its decision despite the fact that Libya did not allow us a single visit to Senussi."
Considered a high-flier in the close-knit world of international lawyers, Alamuddin was hired for the case by Ben Emmerson QC, with whom she had already worked defending the WikiLeaks founder, Julian Assange. Born in Beirut to a journalist mother and travel agent father, the 36-year-old barrister had already gained a high profile as an adviser to former UN secretary general Kofi Annan and was picked by William Hague for a panel investigating rape as a war crime.
Her decision to work as legal adviser to Bahrain's king, Hamad bin Isa al-Khalifa, who has been blamed by rights groups for systematic torture and repression, raised eyebrows, but sources at her chambers in Doughty Street, London, say she is a tough, combative lawyer with experience gained as a prosecutor on the UN's Lebanon war crimes tribunal.
When she failed to get a visa for Libya, or even permission to speak to her client by phone, she sought out Senussi's daughter, Anoud, who was kidnapped and jailed in Tripoli after visiting her father in prison, and later fled to London .
The Senussi appeal hearing against the Hague's decision to back Libya cuts to the very heart of what the ICC is supposed to be. Conceived as a "world court", its mission is to set a benchmark for global justice. In backing Libya, that reputation stands to be badly tarnished.
Libya began the trial of Senussi and Saif al-Islam last month amid chaotic conditions. Senussi, haggard and emaciated in blue prison garb, appeared with other defendants in a steel cage and complained that Libya had broken a promise to the Hague to find him a lawyer.
Prosecutors refused to let him see the evidence against him (he could face the death penalty). The militia of Zintan refused to hand over Saif al-Islam, and the militia of Misrata refused to hand over another eight defendants, while six more were simply missing. Militiamen guarding the Al Hadba prison, where the trial is being held, refused to human rights officials access. Emmerson condemned it as "a show trial without a trace of due process guarantees".
Amaluddin has waited six months for ICC judges to give a date for the appeal. When they do, the issue of defence lawyers will be central. "The Hague court penalises us for not being in a position to give details of all the violations against our client, but there are details we cannot provide because we can't get to see him," she told the Observer.
After 12 years in existence and costing a billion dollars, the ICC has, because of bureaucracy and delays, secured just a single conviction, that of Congolese warlord Germain Katanga. The Senussi appeal hearing promised to be a landmark day, with the Libya process condemned by Amnesty International, the UN's panel on torture and the African Union's court.
"The whole point of the ICC is to be there when national systems can't do the job, said Alamuddin "Instead, it is giving a flawed, dangerous process the stamp of approval."
With the Senussi case active, Alamuddin will not be drawn on why she is defending a man many think deserves all he gets. One clue comes from fellow Doughty Street lawyer John Jones QC, who is defending Saif al-Islam: "Justice needs defence lawyers. The system only works if there's robust advocacy on both sides."
Posted by هدى السرارى at 4:33 م ليست هناك تعليقات: Links to this post

Posted by هدى السرارى at 4:32 م ليست هناك تعليقات: Links to this post Posted by هدى السرارى at 3:00 م ليست هناك تعليقات: Links to this post

Posted by هدى السرارى at 12:08 م ليست هناك تعليقات: Links to this post