business-standard
The Libyan General National Congress Tuesday made partial amendments to the country's criminal law to allow the trial of Gaddafi's son, a judicial spokesperson said.
"The prosecution general, on the judge of security circumstances, required the votes of the General National Congress on amending Criminal Law 241 and 243, to allow the trial of the accused, Saif Gaddafi," Xinhua quoted spokesperson of Libyan prosecutor general Sedique el-Sour as saying.
These amendments will permit an online trial of Saif by connecting the hall of Tripoli court with his prison in Zintan, Sedique said, adding these modifications comply with international conventions.
Saif has been in the hands of local militias in the southwestern town since the downfall of Muammar Gaddafi and the armed group has been declining to hand over Saif without "proper rewards".
"The prosecution general has been facing difficulties in the case file No. 630 of Tripoli Appeal Court...unable to transfer the accused, Saif Gaddafi, to Tripoli," Sedique said. The security situation in Tripoli also add to difficulties in bringing Saif to the court, Sedique said.
Saif is charged with crimes against humanity and genocide.
The Tripoli Appeal Court has postponed the trial of 37 officials of the Gaddafi regime to April 14. The decision was designed to ensuring the presence of all the accused people.
Posted by هدى السرارى at 1:29 م ليست هناك تعليقات: Links to this post

Libya - Libya threatens to spin out of control ^

The recent attempt by an “autonomist” militia in Libya to smuggle an oil shipment out of the country only served to highlight the dramatic challenges fueling regional and international concern as Libya’s domestic strife threatens to spin out of control.

But the interception, last Sunday, by U.S. Navy Seals of the “Morning Glory” tanker, after it left the port of al-Sidr, showed that Western powers were not going to sit idly by as Libya turns into a Somalia-on-the Mediterranean. Three days after the U.S. raid, the U.N. Security Council drove the point further by adopting a resolution authorizing member nations to seize illicit oil shipments from Libya. The resolution pointed out that the illegal export of Libyan oil “undermines the government of Libya and poses a threat to the peace, security and stability of Libya.”
Had the smuggling of the $35-million load of “Morning Glory” succeeded, it would have provided the Cyrenaica-based militias of Ibrahim Jadhran with substantial resources to finance their drive towards “autonomy.” And if black market sale of Multimillion-Dollar oil shipments were allowed to proceed, they could have accelerated the dangerous slide towards civil war. There is ample reason to protest regional imbalances in Libya (and other parts of North Africa). But seeking “autonomy” through the gun barrels of armed militias, especially in zero-sum political environments such as Libya’s, could have only meant further destabilization of a country that’s already a powder keg. Behind the U.N. security resolution, there was intent to prevent such a scenario from unfolding. U.S. Ambassador to the U.N., Samantha Power, made this clear. The “Libyan government’s hand is now stronger in negotiations with militias threatening one of Libya’s most precious resources,” she said. Many Western nations obviously have a business interest in the resumption of oil exports. But so does Libya. The occupation of eastern installations caused oil revenues to drop from 1.6 million barrels a day in 2012 to 350,000 barrels last month.

Three years after the fall of the Qaddafi regime, there does not seem to be a process to resolve political, economic, regional and tribal conflicts peacefully. Seeking the settlement of disputes through dialogue and compromise is not yet a widely shared narrative. If there is a silver lining, it is that the majority of opinion is against “autonomous” initiatives. An opinion poll, published earlier this month by the U.S. National Democratic Institute, showed that Libyans (even in the east) were opposed to the calls for autonomy in Barqa (Cyrenaica) and to the occupation of oil ports by “federalist” militias.

The U.N. resolution did, however, exhort the Libyan government “to resolve peacefully” the eight-month standstill. Heavy clashes, which have erupted yesterday between pro-government forces and the Jadhran-led militias, are laden with risk. A continued showdown is likely to involve regional and tribal militias on both sides. It could also lead to further radicalization of the Barqa militias. “All the battalions that could wage war are built on a regionalist construct and are not part of a real national army,” stresses Libyan analyst Jibril Labidi.

Three years after the fall of the Qaddafi regime, there does not seem to be a process to resolve political, economic, regional and tribal conflicts peacefully
Oussama Romdhani

The General National Congress does not have to worry about being challenged by Prime Minister Ali Zeidan, who was voted out of office during the tanker crisis. However, there are still Libyan factions which dispute the “legitimacy” of the GNC and criticize the “Islamist influence” in its midst. Elections are scheduled for June, but by then politics could turn into a violent free-for-all contest.

Political feuding can make the security vacuum even worse. While most attention was focused on the “Morning Glory” saga, the terror threat in Libya acceded to a new level last Monday, when a car explosion killed eleven newly graduated military cadets and wounded many more. The type of attack signaled a new chapter in the activities of Libya’s al-Qaeda franchise. The modus operandi of the attack was more reminiscent of Iraq’s bloody terrorist tactics than of the targeted assassination incidents of the last three years.
Despite their hasty exit after their 2011 military campaign, Western powers seem willing today to extend a “helping hand” to Libya. But the country’s zero-sum politics have hampered consensus over credible interlocutors. Even during the recent “Friends of Libya” conference in Rome, divisiveness was on full display to the world. GNC President Nuri Abu Sahmain and Prime Minister Ali Zeidan both led their own delegations. It is meaningful that after the Rome meeting, the French foreign ministry pointed out that “national reconciliation is an essential stage in establishing rule of law” in Libya. Libyan authorities also fret over resentment by parts of the population of outside help. “Asking for international assistance in this fight is not violation of Libyan sovereignty. What violates our sovereignty is the killing of these youth in cold blood,” pleaded the justice minister, Salah Marghani.

An additional risk factor is simply the shortage of time. Former Minister of the Interior Fawzi Abdul-Ali sees “at least three or seven more years” before “real security” is established in the country. But neither Libya nor its neighbors, considering the region’s interconnected economics, are going to convince the masses of young people desperately seeking a better life to wait for that long.
Posted by هدى السرارى at 1:26 م ليست هناك تعليقات: Links to this post 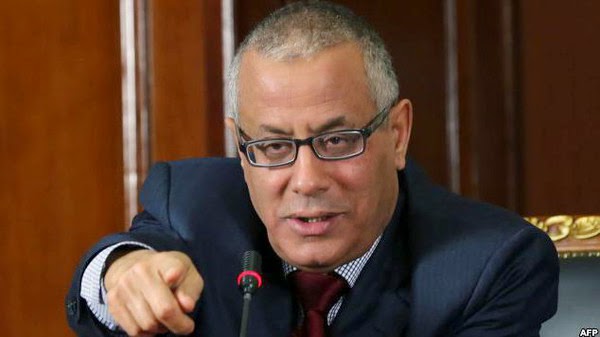 Posted by هدى السرارى at 1:15 م ليست هناك تعليقات: Links to this post