(Reuters) - Libya has still not approved a budget for 2014 as it finds itself in a tight financial situation owing to the loss of oil revenue, the acting economy minister said on Tuesday.
"We are in a very difficult situation. We all need to understand that there is still no budget approved for 2014," Souhail Abu Sheikha, acting economy minister, told reporters.
He added the budget crisis had been made worse by the government's inability to collect customs duties. Protesters and militias have blocked the country's major oilfields and ports since July 2013, depriving Libya of its main revenue stream.
Posted by هدى السرارى at 4:44 م ليست هناك تعليقات:

sunherald
TRIPOLI, Libya — A militia commander controlling Libya's oil terminals denounced the seizure by U.S. commandos of a tanker that his militia was using to try to export oil in defiance of the country's central government, calling its capture "piracy."
Ibrahim Jedran, who is part of a movement demanding autonomy for eastern Libya, accused Washington of supporting authorities in the capital, Tripoli, who he said were dominated by Islamists. Speaking in a televised statement, he said the central government is ignoring the aspirations of the east, where the public has long complained of marginalization and discrimination by Tripoli.
Jedran demanded the U.S. free three eastern Libyans who were aboard the tanker when it was seized late Sunday. He warned that if the men are handed over to Tripoli, it risks "civil war." BBC
Libya, a mostly desert and oil-rich country on the southern shores of the Mediterranean Sea with an ancient history, has more recently been renowned for the 42-year rule of the mercurial Col Muammar Gaddafi.
In 2011, the colonel's autocratic government was brought to an end by a six-month uprising and ensuing civil war. In October of that year, the main opposition group, the National Transitional Council (NTC), declared the country to be officially "liberated" and pledged to turn Libya into a pluralist, democratic state.
In August 2012, the NTC handed over power to Libya's newly elected parliament, the General National Congress.
A former Roman colony originally inhabited by Berbers and settled by Phoenicians, Libya saw invasions by Vandals, Byzantines, Arabs, Turks and more recently Italians before gaining independence in 1951.

Libya underwent a major change when long-term leader Muammar Gaddafi was toppled in a popular uprising in 2011
Oil was discovered in 1959 and made the state - then a kingdom ruled by the head of the Senussi sufi order - wealthy.
Col Gaddafi came to power by overthrowing King Idris in a coup in 1969, ten years after independence, and Libya embarked on a radically new chapter in its history.
After initially seeking to emulate the Arab nationalism and socialism of Egyptian President Gamal Abdel Nasser, Col Gaddafi's rule became increasingly eccentric.
Ideas put forward in his Green Book aimed to set forth an alternative to both communism and capitalism. Col Gaddafi called the new system a jamahiriya, loosely translated as a "state of the masses". 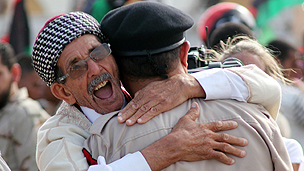 In theory, power was held by people's committees in system of direct democracy, without political parties, but in practice, Col Gaddafi's power was absolute, exercised through "revolutionary committees" formed of regime loyalists.
After the 1988 bombing of a PanAm plane above the Scottish town of Lockerbie, which the US blamed on Libya, the Gaddafi regime was shunned by much of the international community.
But in 2003 it underwent a dramatic rehabilitation by taking formal responsibility for the bombing, paying compensation and handing over two Libyan suspects, one of whom, Abdelbaset Ali al-Megrahi, was convicted for the attack. The UN responded by lifting sanctions.
In 2011, the world once again turned against the Libyan government over its use of violence against the popular uprising against the colonel, inspired by the anti-authoritarian protests sweeping through the Arab world.
The UN Security Council passed a resolution authorising Nato air strikes to protect civilians. After months of near-stalemate, the rebels stormed into Tripoli August 2011, and several weeks later Col Gaddafi was killed when his last holdout was overrun.
A transitional government took charge and had the challenge of imposing order, disbanding the former rebel forces, rebuilding the economy, creating functioning institutions and managing the pledged transition to democracy and the rule of law.
Elections for a General National Congress were held in July 2012, the country's first free national election in six decades. The congress appointed a prime minister, Ali Zeidan, in October, who formed an interim government tasked with preparing the ground for a new constitution and fresh parliamentary elections.
However, tensions within the GNC between nationalists and Islamists have stymied attempts to produce a clear timetable for fresh elections.
One of the biggest challenges facing the new authorities is the plethora of armed groups - some originating in the anti-Gaddafi rebellion, others newly arisen - who have defied attempts to disarm them, and have caused concerns about the prospects for stabilisation.
In May 2013, some of these gunmen successfully pressured parliament into passing a law banning Gaddafi-era officials from public office by besieging government buildings in Tripoli.

And in March 2014, an oil tanker's defiance of a Libyan navy blockade of a rebel-held port led to the fall of Prime Minister Ali Zeidan.
Posted by هدى السرارى at 3:05 م ليست هناك تعليقات:

home land security news wire
U.S. Navy SEALs Sunday night have boarded and taken control of Morning Glory, a North Korea-flagged which nine days ago had been loaded with crude oil at al-Sidra, a rebel-held port in eastern Libya, the Pentagon said on Monday. The SEALs boarded the 21,000-ton tanker using helicopters and fast boats. The Pentagon spokesman said that a U.S. navy crew was now piloting the tanker back towards a government-controlled Libyan port in west Libya.

U.S. Navy SEALs Sunday night have boarded and taken control of Morning Glory, a North Korea-flagged which nine days ago had been loaded with crude oil at al-Sidra, a rebel-held port in eastern Libya, the Pentagon said on Monday.
The Libyan navy failed to prevent the tanker from leaving the port with an estimated $20 million cargo. The Libyan army had earlier ignored Prime Minister Ali Zeidan’s order to move against the rebels and take control of the port before the tanker sailed away. Zeidan then turned to armed militias loyal to him to try and prevent the tanker from leaving port, but the eastern-based rebels paid off the militias which were supposedly loyal to the prime minister, and the tanker left port.
Western Libyan tribes then arranged for the Libyan parliament to support a no confidence measure against Zeidan, and he fled the country to Germany (see “Libyan PM escapes country after assembly ousts him over oil tanker fiasco,” HSNW, 13 March 2014),
“The Morning Glory is carrying a cargo of oil owned by the Libyan government’s national oil company,” said Rear Adm. John Kirby. “The ship and its cargo were illicitly obtained from the Libyan port of Es Sider.”

“The SEAL team embarked and operated from the guided missile destroyer USS Roosevelt (DDG-80). USS Roosevelt provided helicopter support and served as a command and control and support platform for the other members of the force assigned to conduct the mission,” Kirby added. “No one was hurt tonight when U.S. forces, at the request of both the Libyan and Cypriot governments, boarded and took control of the commercial tanker Morning Glory, a stateless vessel seized earlier this month by three armed Libyans,” Kirby said in a statement.
Posted by هدى السرارى at 2:59 م ليست هناك تعليقات: