BBC NEWS.
The FBI has said there are "no known additional threats" in Boston following the bombing of the marathon.
At a news briefing, officials said no bombs other than the two which exploded had been found, but that no-one was being held over the attack.
Three people were killed, including an eight-year-old boy, and more than 150 injured by the bombs.
Doctors treating the wounded have said a number of people have had pellets and "nail-like" fragments removed.
Speaking to reporters at Massachusetts General Hospital, where many of the wounded have been taken, one doctor said he believed the fragments had been inside the bomb.
He said some patients had more than 40 shrapnel wounds, and that several amputations had been carried out.
'Cruel act of terror'

Richard DesLauriers, the FBI agent in charge of the investigation, told reporters in Boston there was "no known imminent physical threat at any location where we might be conducting investigative activity right now". 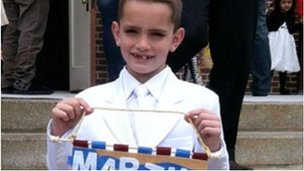 Eight-year-old Martin Richard was one of the three people killed by the bombs
He said the FBI was "not aware of any threat information prior to the marathon".
Police had received "voluminous tips" from the public, he said, urging people to co-operate with investigators.


"We will go to the ends of the Earth to identify the subject or subjects who are responsible for this despicable crime, and we will do everything we can to bring them to justice," he said.
The governor of Massachusetts, Deval Patrick, said it was "important to clarify that two, and only two, explosive devices were found yesterday"


There were earlier reports that several unexploded devices had been found across the city.
Mr Patrick said all other suspect parcels had been examined and found not to be bombs.

Timothy Alban of the Massachusetts State Police appealed to members of the public to send in any footage they had from the day.
"There have to be hundreds if not thousands of photographs or videos or observations that were made down at that finish line yesterday. And they're sitting out there amongst everyone that's watching this event this morning," he said.
"You might not think it's significant but it might have some value to this investigation."
Officials praised emergency workers and volunteers who had helped those injured, saying they had saved lives.
The first of the explosions went off close to the finishing line at about at 14:50 local time (18:50 GMT) on Monday.
Then seconds later, as rescuers were rushing to help the injured, another explosion went off about 170m away from the first blast.


Details of those killed have been officially released, but eight-year-old Martin Richard, from Boston, has been named as one of those killed.
His mother and sister were also injured as they waited for his father to finish the race.
US President Barack Obama had said those behind the attack "will feel the full weight of justice".
"We will find out who did this. We'll find out why they did this," he said.